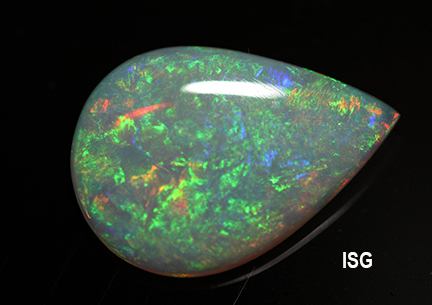 Opal is a gemological study all its own that can last a lifetime. There are many classifications of opal, far more than we can go into here. You need to know the basics of how to identify opals as natural, from a gemological standpoint. But if you are going to buy and sell opals as a dealer, you will need a lot of experience in the valuation of opals, and you will need a lot of experience in the wide varieties of types, grades and colors of opals because small variations in color or formation can account for wide variables in value. So, don’t think you are going to be able to go to The Guide, or some other industry publication, and get enough pricing information to appraise a fine quality opal. It just won’t happen. Opal appraising should be done by those who have heavy experience in the opal markets, and/or have a lot of friends that deal in opals.

It should be noted that opals are considered part of the quartz group of gemstones by some authorities. Mainly because it is a silicon dioxide, just like quartz. Opals consist of a significant amount of water, about 15% water is the reported average, but can run as high as 30% water. Given the fact that opal does not have a crystal structure, (it is amorphous), placing it in the quartz group would be based on chemical composition only. It shares few other properties with quartz.

You should note that the term fire opal does not mean an opal with a lot of fire. It is a specific name for a variety of opal that is translucent to semi-transparent, yellow to orange in color, and is normally faceted…although can be cut en cabochon. I hear many, many jewelers incorrectly refer to nice quality crystal opals as “fire opal”. This is wrong, and will tell you that the person does not know opals.

Source: Most important deposits in Australia, Brazil, and US (Nevada).

Formation: Opals occurs due to silicon rich ground water seeping into voids left normally by decaying ancient trees. Although other types of created underground voids can cause opalization to occur, the decaying forest is the place where most opals form. Which should tell you something about climate change as the world’s best-known opal field is in the middle of what is now a desert in Australia at Lightning Ridge. But as the cellulose of the tree wood decays, it leaves empty cells in the wood. As the silicon-rich water seeps down into the void, it eventually dries out and leaves the silicon behind to form opals. Some of the water is retained by the silicon dioxide…which is why opals contain so much water. And the silicon forms as small rows of round spheres that create play of color, a diffraction of light that is the same effect as a diffraction grating spectroscope.

Opal can also occur in cavities in the rock where the water can congregate and dry slowly…allowing the silicon to form the opal.

Unusual Properties: Endless. Every opal is unique. And the color and pattern possibilities are endless. Opal do occur showing asterism and chatoyancy.

Wearability: Fair. Opals have a hardness that averages 6 on the Mohs Hardness Scale. It makes better necklaces and earrings than rings as far as long-term wear is concerned.

Specific Gravity: 2.10 average but can vary widely based on the amount of water contained in the stone.