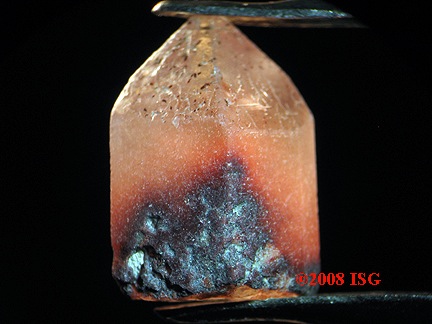 Primary Test: There is not a diagnostic test for grass roots level jewelers on this treatment, but a bit of common sense will help find some good indicators. Large imperial topaz gemstones are quite rare and expensive. Therefore large imperial topaz gemstones being offered for cheap prices should be suspect from the very beginning. The other issue is what we have found throughout the gemstone treatment world to date…..large scale treatments of gemstones will always leave a footprint somewhere on or in the stone if one knows where to look. In this case the zoning of the colors of the topaz gives a strong indication of treatment. Natural imperial topaz of various colors will normally be uniform in color with intensities at the ends due to the light interaction with the stone. With the irradiated stones the color variations are due to areas of strong color and other areas of a complete lack of color in the stones…..not due to light interaction. The result is that the stones can be placed in an immersion cell in a microscope and the unnatural color zoning will become readily apparent.

It should also be noted that many of the pink topaz being sold as Imperial Pink Topaz are also irradiated. Natural pink topaz have been found in only one location in Brazil to date: the Ouro Preto mine. But large pink topaz have been found on the market, particularly from Thai dealers. These should be considered as irradiated treated unless advanced testing is done. Natural pink topaz will normally cost in excess of US$1,000.00 per carat which should also serve as a consideration when a low cost pink topaz is offered for sale.

Repair and Setting: No special care other than normal handling for topaz. Irradiation treatment does not affect the integrity of the stone based on research as of this time.