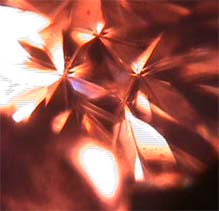 What color is it?: In its original lab created state most synthetic moissanite was green. However, with some creative chemistry a variety of colors are possible. However. most often seen will be the colorless variety that is creating such a stir in the diamond industry.

What is the story behind this gemstone?: There are many explanations of the origin of synthetic moissanite, but the most accepted is that the stone does not normally exist on earth, or at least in very tiny examples if it does. The first real identification of moissanite was in a part of the meteorite that formed the huge impact crater in Arizona. And in that meteorite was found tiny moissanite crystals. Of course, at the time they were not called moissanite, they were just silicon carbide. But since it was Mr. Moissan who made the discovery, he got to name the stone. And what else would you call it but moissanite. The mineral was found to be above a sapphire in hardness (but still not close to a diamond) and had a lot of sparkle. So sure enough someone was going to try to make it in a laboratory and try to sell it as a diamond imitator. In comes the 3C guys who got a patent on a synthetic version of moissanite and set up to sell it in the United States as the best diamond imitator since cubic zirconia. Somewhere along the way the 3C guys became the 2C guys so the name was changed to Charles and Colvard which is the name today. The Russians have also synthesized moissanite but since there is already a US patent on the process the Russians cannot market their product in the United States.

But here’s the good part. For a number of years many jewelers have relied on a little gizmo called a thermal conductivity meter to identify diamonds for them. Since diamonds would transmit heat faster than a cubic zirconia these meters could easily separate the two stones. Unfortunately, many jewelers did not get enough training for themselves to be able to identify a real diamond from a cubic zirconia by any other method, and instead relied on this meter to separate diamond from cz. Unfortunately, synthetic moissanite reacts to these meters just like a diamond and not like a cz. Result, some jewelers who could not tell the difference. Which basically threw the retail jewelry industry into a tizzy because everyone believed that there was no way to separate a diamond from a synthetic moissanite. So the guys at 3C got a brain storm: Not only would they sell the synthetic moissanite, they would also sell a type of tester that would indeed separate the new synthetic moissanite from diamond. And to help sell their testers they made all sorts of hype about how difficult this new synthetic gemstone was to separate from diamond, and how jewelers needed one of these new testers to protect themselves from synthetic moissanite. And at about $500.00 a pop, 3C was doing pretty well for themselves. Until…..

Someone from the gemological side of things said, “Wait, this stone is more highly double refractive than peridot!” Which made everyone else stop and say, “Then we don’t need no fancy testers…we have a 10x loupe!” And they were right. With only a 10x loupe anyone can identify a synthetic moissanite and separate it from a diamond.

But….there is one more chapter to this story that has not yet been played. The proverbial fat lady. There is a way to make synthetic moissanite in a cubic crystal formation. Meaning that it will not be double refractive. At that point everyone is going to be very, very sad that we did not support Sarasota Instruments with their excellent infrared reflectance meter called a Jemeter. Because this will be about the only cost effective thing out there that could have made identification easy..for this and a lot of other gemstones. But that will be another story for another day.

Here’s the rest of the story on synthetic moissanite……

Chemical: Silicon Carbide…sort of like a drill bit or saw blade.

Formation: Either laboratory grown or in very basic igneous rocks in very small sizes, or else in meteors

Crystal System: Hexagonal in general but a cubic formation is possible (please read below)

Special Identification Properties: Easy to separate from diamond by double refraction and high refractive index. Anyone with either a 10x loupe or a Jemeter reflectance meter should have no problem. However, if they ever start making the cubic form of synthetic moissanite the loupe test will be kaput! 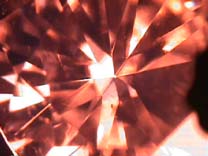 A synthetic moissanite as seen in 10x through the table

The viewing angle to best see the facet doubling.

With greatest appreciation to:

Without whose excellent books on this subject these web pages would not be possible. YourGemologist.com