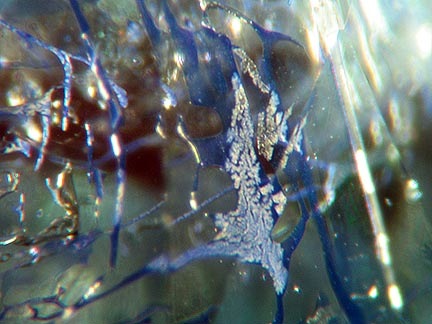 Primary Test: Magnification is key with most synthetic garnets for a variety of issues. The flux garnet as seen below is easy to identify as some of the blue flux from the melt got caught in the fissures of the stone during crystal growth. Other synthetic garnets such as the YAG (yttrium aluminum garnet) are often used as imitations of diamond and the difference in properties is significant enough to make the separation fairly easy for a properly trained gemologist.

Secondary Tests: With a refractive index in the garnet range, synthetic garnet such as the YAG should be an easy separation from diamond since diamond is over the limit of the refractometer. Owing to the single refractive nature of garnets, and the unique position they have on the scale of RI readings, the RI should be diagnostic for separation of synthetic garnets from other gemstones they are meant to emulate.

Repair and Setting: As a true lab grown garnet the same care should be taken as with natural garnets. Should be removed before any heat is applied. Cleaning in ultrasonic should not affect this lab created garnet.