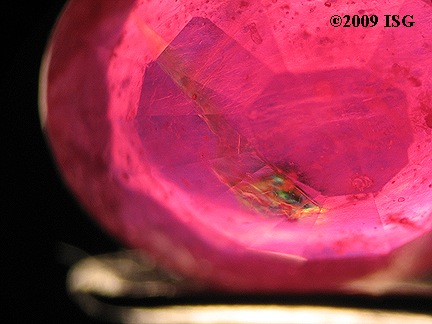 Primary Test: The treaters have really gone beyond the call of duty with this material. What they have done is use the concept of reconstituting turquoise and applied it to broken chunks of ruby. The process (in its very simplest of terms) is to take the pieces of ruby or corundum and glue them into a mass that can be cut and faceted to make what appears to be a natural ruby. The problem is that as with any treatment of this type it is impossible to do this without leaving a major footprint somewhere. In this case the footprint is that the pieces never meld together perfectly and the glue becomes highly visible under magnification. As you will note below, the ruby appears to be fracture filled as there are distinct features of this stone that show these features, but even a fracture filled ruby is more valuable than a reconstituted ruby made of a lot of broken material glued together. When viewed in high magnification the seams between the broken pieces become visible with one in particular that we chose as a demonstration example. Note that in high power magnification the glue in the separation is highly visible, and marks this ruby as reconstituted material that was unfortunately sold as a natural, untreated ruby by a dealer in Chantaburi, Thailand.

Repair and Setting: A goldsmith’s nightmare. No attempt should be made to do any repairs on a jewelry item containing one of these reconstituted rubies. Very fragile to any pressure or heat. At this time all rubies, unless certified by a major lab, should be suspected of treatment. This particular treatment is particularly heinous as consumers are rarely informed of the status of the stone. More than one jeweler has faced the problem of a shattered ruby during repairs, and having to explain the situation to the consumer after the fact rather than before. In the current market all rubies should be approached with caution.