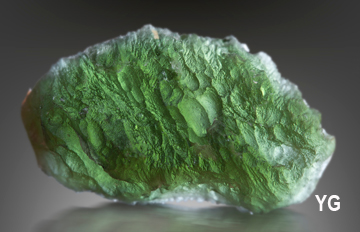 An out of this world event is believed to have created this strange gemstone. Moldavite is the name given to a type of fused silicon glass that is found where meteorites have impacted the earth and transformed silicon rich rocks. The stones carry many properties of glass and are found in known impact areas of meteorites. It is named for Moldau, Czech Republic from which the first known discovery was made.

Source: Potentially worldwide, but most notably the Czech Republic, Australia, and the USA.

Unusual Properties: Because of their rarity, moldavites have become a collector’s item. They are generally small, rarely averaging more than 1 inch before cutting. So, a large moldavite would be fairly rare and probably quite expensive. Being able to separate true moldavite from plain old green glass will be the important property for gemologists to learn.

Special Identifying Properties and Tests: RI and SG should pretty well separate moldavite from any other gemstone. Not much other than glass in that area and in this color. But you need to be aware of green glass counterfeits. Most green glass will show the characteristic gas bubbles and swirl lines that moldavites do not offer.