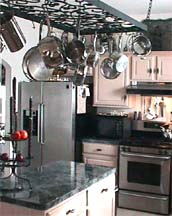 We are standing in an ordinary kitchen inside an ordinary
house. The cabinets are stocked with an ordinary array of food
stuffs, condiments, and garnishes. The cabinets are also stocked
with ordinary pots, pans, dishes, flatware, and serving utensils.
In other words…we are in just about any kitchen, in any home,
around the world. With one exception: along with us we have a
high heat, high pressure hydraulic press. And with this press
we are going to take ordinary items from this ordinary kitchen
and make some extraordinary gemstones and minerals.

To do this we will take elements contained in these various items
in this kitchen, mix them together in our hydraulic press, heat
them to the required temperature, and allow them to form crystals
of the various minerals that we choose to make. Admittedly we
are taking some poetic license since the correct conditions of
heat and pressure could not really be duplicated in our kitchen
press, and some crystallization processes take millions of years.
But for the sake of our understanding of gems and minerals, we
will speed up time, turn up the heat, and increase the pressure
enough to make this happen for us here in our ordinary kitchen,
in our ordinary home, and within a short period of time

We will start with something easy. Like an opal. To make the
opal we will forgo growing an ancient
conifer tree and having to wait until it dies and decays in the
ground and the empty space left being filled with liquid silicon
that hardens into an opal. We will simply take the required products
from the kitchen cabinet and make an opal. In this case all we
need is some of the silicon glue from the tube under the kitchen
sink. Opal is a hydrated oxide of silicon, which means the tube
of silicon glue we have can be mixed with some of the air in
the kitchen, and some water from the faucet, and stir it up until
is forms a paste-like concoction. Now we can let this paste seep
into a cavity, formed where our ancient conifer tree died, was
buried by other vegetation, decayed and disappeared. Wait about
a million years, and viola’ the paste has hardened into a nice
opal.

Silicone + oxygen from the air in the kitchen + water = Opal

Since we have our tube of silicon glue out we might
as well whip up a batch of amethysts while we’re at it. The ingredients
are basically the same, we just need to make a few changes. First we will take some of the silicon
from our tube of glue and put it in the press. We will need some
of the oxygen from the air. Just like an opal, silicon and oxygen
are the prime ingredients of quartz. Which is a large family
of gems and minerals of which amethyst is a member. But even
though all of the family members are quartz, they are all a bit
different because each has its own type of impurity in the form
of various other elements within their crystals, which cause
the variations in colors. So in order to make an amethyst we
are going to mix the silicon and oxygen, but we are also going
to have to take down that iron skillet from the pot rack. Because
amethyst has just a pinch of iron in it to give it its purple
color. So we will add a piece of the handle from the cast iron
skillet to the silicon glue and oxygen from the air and turn
on the heat and pressure for a few million years and again, viola’,
we have an amethyst.

We can do the same with our silicon and oxygen mix to make
a lot of other members of the quartz family. Throw the

entire cast iron skillet into
the press and you will have a yellow citrine. Turn down the heat
so the mixture does not have as long to crystallize and it will
make millions of tiny crystals that will form a larger massive
stone known as chalcedony. These will not be transparent but
will rather be opaque.

But lets get a bit more creative with our chalcedony mixture.
We will leave in the silicon and oxygen, but this time add some
of the nickel. We can take some nickel from the Ni-Cad rechargeable
batteries from our emergency light on the wall.

We will take some of the nickel and add it to the mix, leave
the heat down low so the mix crystallizes quickly in small massive
stones, and now we get the beautiful apple green variety of quartz
chalcedony known as…chrysoprase. We could continue all day
with the quartz family but there is so much more to see. So we
will press on (no pun intended)!

Since we have torn up our cast iron skillet

we might as well use some of it to make ourselves a peridot.
Except for this we will also need some magnesium. So we will
go to the cabinet and get the “milk of magnesia”,

you know, the antacid. We could also use
the magnesium from the Epson salt, but
we may need that later. For now we will use the magnesium, some
iron from our skillet, and throw in some or our silicon glue
from the tube that is starting to get empty by now,
and put them in the press with some oxygen from the kitchen under
very high heat and pressure and we get ourselves a very nice
peridot crystal. (Mg2SiO4-Fe2SIO4)

Now that the milk of magnesia bottle is open we should use
what’s left to stir up some garnets. But for these we will also
have to get the aluminum foil out of the cabinet. Because garnets
are made from magnesium, aluminum, oxygen, and what’s left of
our tube of silicon glue. We will put all of this into the press
and we will soon have a beautiful red pyrope garnet. If we take
out the magnesium and add some iron from our skillet to
the aluminum foil,

and oxygen and silicon glue

,
we will can have ourselves an almandine garnet. Tired
of red, let’s go to the cabinet with the vitamins and get some
chromium tablets.

We can substitute
that chromium for the iron, and get a beautiful green uvarovite
garnet. Since the stainless steel cookware

contains almost 18 percent chromium we could have used those for our chromium source. But then, the tablets have more chromium
and we may need the cookware for dinner. Lets go to the corundums………

Getting board with green and red stones, lets make some blue
sapphires. Sapphires occur in every color of the rainbow so we
can have some fun with this one. We have just about everything
out we will need to make a sapphire. The mineral that forms sapphire
is known as corundum. The red one’s are known as ruby, every
other color is known as sapphire. We will create a blue color.
All we need to make a corundum is the aluminum from our roll
of aluminum foil,

and oxygen from
the air.

Pure and simple. Throw that aluminum
foil into the press with some oxygen and you will get a colorless
corundum crystal. But for some color we will need to add something
extra. We will put some of the iron from the skillet

in
the mix along with something new…titanium. There are a number
of places in the kitchen we can get titanium. We can take it
from the white paint on the walls,

from the plastic cups in the cabinet,

or from the linoleum floor. Since we don’t need much we can scrape
some paint from behind the refrigerator and put it in the press.
The aluminum and oxygen will form the corundum, and the iron
and titanium will join together by sharing an electron, and together
they will selectively absorb the right colors to make our

sapphire transmit a beautiful
blue color. (Al2O3) This one is the colored banded one from the
gem grading course.

And of course, you can take the aluminum

and oxygen from the air

and
mix in just a pinch of chromium

and you will have yourself…..a ruby!

That’s all there is in a ruby.

We can make some simple gems and minerals with very little
effort. Just take the graphite pencil lead

out
of all the pencils in the drawer, turn the heat and pressure
up to the highest setting and we can make a

Or dissolve some table salt in
a bowl of water and let it sit long enough to dry and form crystals.
You have halite.

Here’s another good one. The TUMS tablets by the sink.

it is made of calcium carbonate.

. Nothing else needs to be added.
And if we run that aragonite through an oyster, we will get ourselves

some nice South Sea Pearls. If
you allow an ammolite to eat your TUMS, he will eventually turn
that calcium carbonate into a sea shell. Which will one day become
a gemstone made from a fossil called ammolite All
four items, TUMS, aragonite, ammolite, and pearls, are made from
the same mineral: calcium carbonate (CaCO3).

Something in pink? No problem. Take some of the lithium grease
from under the sink,

use what’s left of our silicon
glue,

and
we can make ourselves a variety of the spodumene family known
as kunzite. ( LiAlSi2O6 ) Don’t take it out in the sun, though.
The color is not permanent and will fade in strong sunlight.
That’s why they call it the “midnight stone”.

But if you stick it in a flame
it will make the flame burn a brilliant color of red.

How about some feldspars? Let’s make a variety of microcline
feldspar known as amazonite.

For
this we will need to go to the refrigerator and get a bunch of
cans of Diet 7UP. In those we will
find a great source of potassium due to the preservatives: potassium
benzoate, potassium disodium
EDTA, and acesulfame potassium. We will take this potassium,
mix it with our aluminum foil,

add
some silicon glue from our tube

,
and finally oxygen from the kitchen air

…and
make ourselves an amazonite, a member of the potassium feldspar
group. (KAlSi3O8)

OK, one more. Someone may be wanting to start dinner. We are
going to take some of the sodium out of the salt shaker on the
table (you know, sodium chloride).

, a piece of iron from the cast iron skillet,

whatever is left of our silicon
glue tube,

and
just a pinch of chromium from our vitamin cabinet.

Press
it at the right temperature and pressure. And we have made ourselves
a very fine piece of jadeite known as Imperial Jade. Na(Al,Fe)Si2O6

I hope you enjoyed this little demonstration
on the formation of gemstones. I took some poetic license, I
realize. You cannot actually make gemstones in your kitchen without a lot more heat and pressure than you can generate. So please don’t you science guys write me and tell me
every little detail of physics that may have been violated. The
general purpose was fulfilled with a respectable amount of accuracy.
And the real purpose was to have some fun. I hope it fulfilled
its purpose for you.