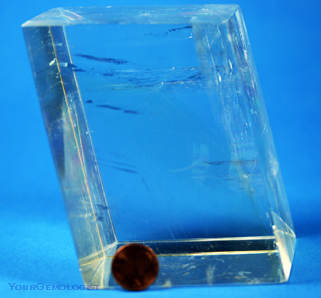 Purpose of Demonstration: To demonstrate a gemstone’s ability to split a single beam of light into two or more beams. This demonstration graphically shows the birefringence of a gemstone, most notably calcite which has a birefringence of .172 which is extremely high. Meaning that the gemstone will split a single beam of light into two beams, which, due to the clarity and large size of available crystals, allows us to demonstrate this splitting of a light beam using a laser. It is this ability of gemstones to split a beam of light into two or more beams that allows us to have gemstones such as tanzanite, andalusite, and iolite to name a few. These gemstones offer remarkably different colors in different directions of observation using a dichroscope. But the separations of the beams is so small that our eyes cannot see this separation without a dichroscope. Fortunately, the separation in calcite is so strong, we are able to see this optical property in the following demonstration.

Equipment Required: A fairly clean (clear) calcite crystal of at least 2×2 inches in length/width. And a regular laser pointed available from any Office Max or Office Depot…and probably half the students in class.

Cautions: Don’t point the laser into anyone’s eyes. Even the low power laser pointers can cause damage to young eyes.

Here’s how it works: Simply turn out the lights and shoot the laser beam into the calcite crystal from varying directions. Some crystals are oriented so that the long direction will show the best separation. But it is just a matter of pointed the laser into the stone and finding the best direction of observation.
The laser light beam will split into two distinct beams with occasional “X” patterns showing. Below you see the view from one end of the calcite crystal with the laser source directed into the crystal from the opposite end. Be careful with the demonstration as you are working with a laser and even low powered lasers can be harmful to young eyes. But if basic precautions of not looking into the laser are taken you should have no problems.

Below you are seeing a single laser beam being split into two beams by the natural property of the calcite crystal. Contact us to obtain an optical grade calcite crystal for your school or group.