It is interesting to note that several of the synthetic gemstone processes are based on wartime efforts unrelated to gemstones. Such as the case with synthetic diamonds.

Synthetic diamonds were needed during World War II, due to the lack of availability of natural diamonds for war time production. And in fact, the recently resolved issues revolving around DeBeers not being able to come into the United States due to an outstanding legal problem, was due to DeBeers trying to control the production of industrial grade synthetic diamonds from the time of that war.

The production of hydrothermal quartz is another process with seeds in the World War II efforts. Quartz crystals were necessary for production of radio and other electronics during the war. But only high-quality crystals from Brazil were of use for the high-tech production. And since the routes to the Brazilian fields were blocked to German scientists, it was the Germans who perfected the process during the war, to take the place of the unavailable natural stones.

The process itself is rather simple, although the actual production involves a great deal of finely tuned science to make it work properly. In general, an autoclave is set up with a high and low end as shown in the graphic you will see in just a few minutes.

The autoclave is lined with gold and has heaters running the length of the unit. The heaters are tuned so that the bottom is much hotter than the top line of heaters. Thereby making a significant heat differential in the internal temperature of the autoclave.

Next, a solution of nutrient rich material is added, with the concentration of material going to the bottom. This material is usually low-quality milky quartz that is of abundance but very low quality. This is heated in the lower section until it becomes hot enough to liquidate, and to rise to the top of the autoclave. There the cooler temperature causes the molten quartz to cool enough that the quartz comes out of its liquid state and attaches itself to a seed crystal of high-quality quartz, natural or synthetic, that allows the seed crystal to grow. Once the liquid has cooled, it falls back down to the bottom of the autoclave by a natural convection current established by the variable heat and gravity. There it is heated and again becomes enriched with nutrients and starts the process again.

Before we look at the science, let us take a look at the graphic of this autoclave and see how it works. 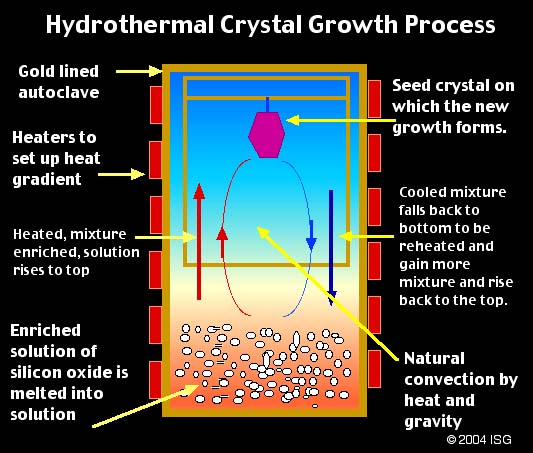 Perhaps the most important aspect of hydrothermal gemstone growth is the significant pressure and heat required to allow the crystals to grow. Below is a chart of information on quartz crystal growth that will demonstrate the environment that must be created for crystals to form. It should be noted that these are the figures from Northrop Grumman for their production of space related quartz crystal production. There are a number of different combinations that allow for quartz production for various uses. Also, gemstone production in other minerals such as beryl for emerald will vary also. So, the list below is for the above stated purpose. Other applications will require variable numbers in case you find these in other venues.

Pressure in the Autoclave: 25,000 pounds per square inch

Growth Time: Up to 10 weeks for gemstone crystals as seen below

The temperature, of course, will vary from the top to bottom of the autoclave. The variable you can see above is significant for this application. This sets up the natural convection as the warmer solution rises to the top and the cooler drops to the bottom to be reheated and make the trip again.

The result is quartz crystals that can be grown quite large and of very high quality. This production allows for the vast majority of quartz used in electronics including the quartz crystals used to make quartz watches. And by adding certain elements to the mixture, synthetic amethyst can be produced. Below are two photographs of a large synthetic amethyst grown by the hydrothermal process. Notice in the photograph on the left that the crystal is of uniform color and clarity. However, when you turn it the right direction, the seed crystal used to start the process is visible. This piece is approximately 4 inches in height. 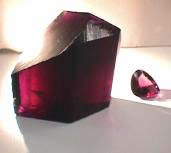 Another important aspect of hydrothermal crystal growth is the directional property of growth. As you will note from the arrows attached to the photograph below, the crystals grow at different speeds in different directions. This causes one direction to grow at almost 3 times the speed of the other. This sets up internal crystal structure anomalies that help in identification of certain gemstones as being hydrothermal. 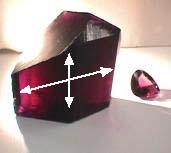 Let us take a look at an example of a hydrothermally grown emerald crystal, along with the finished product. You will notice that the emerald crystal shown below is of the same basic shape as the amethyst crystal shown above. This is due to the formation process. And while the chemical and structural synthetic emerald is the same as the natural, the formation during the hydrothermal process is different from the 6-sided hexagons you see in nature. Also, please note the same colorless seed crystal that you can see in the emerald below and the amethyst above. This is the starter seed that is placed in the hydrothermal solution to start crystal formation. 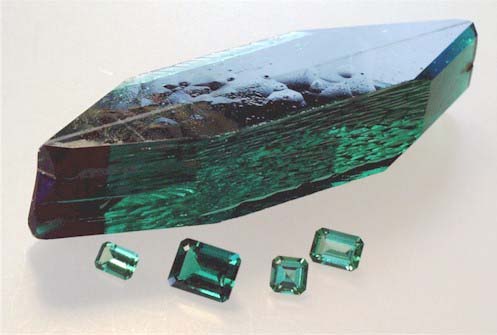 And here is the finished product set in a ring… 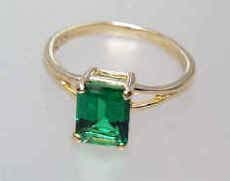 Identification
We are going to be looking at quite a few hydrothermal synthetic gemstones during the lessons in this course. And you are going to find that the hydrothermal gemstones are fairly easy to identify…owing to a rather peculiar feature that is present in most of the stones.

Notice below that we have a small block of hydrothermal emerald. It has some rough sizes because it has been cut in pieces to be faceted for a gemstone. But notice this image below…then go to the next one below this one and see what you see… 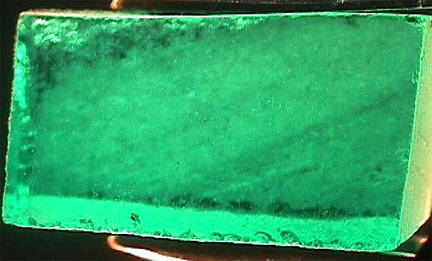 Below you see that when you rotate the rough slab just slightly, you see a long formation of parallel lines. These are cellular growth features that occur in many hydrothermal gemstones that will allow you to identify virtually all of the hydrothermal family of synthetics. The features you are seeing below are at 20x, so they are fairly easy to see. But let us continue…

When you turn out the dark field light and turn on the overhead fluorescent light to view just the surface, the structure of these features come into better view. Here you can see how these cellular structures extend through the stone to the surface. And since they go all the way through the stone, you can easily see them when they are present in a cut or faceted gemstone as seen below in the next image. 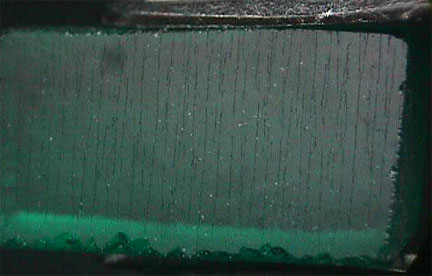 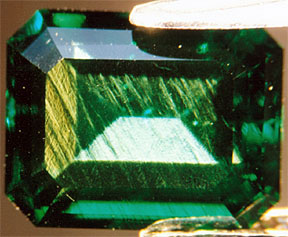 If you have questions, comments or information to add to this study of Hydrothermal gemstones creation, please send it along. By adding the information of everyone can we all learn from each other.