A real Indian arrowhead found by YourGemologist at the base of a rock at Queen’s Peak, Montague County,Texas

Crystal System: None, organic in origin 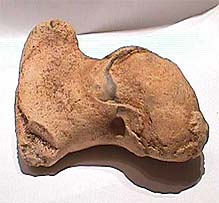 Unusual Properties: As seen above and below, flint has been used to make tools, spear points, and arrow heads for centuries. The arrow head shown above was taken personally from a 100 year old battle ground between the US Army and the Comanche Indians of North Texas. The place known as Queens Peak is located in Montague County, Texas. This arrow head was once on the tip of an arrow shot at a US Army soldier in the Texas Indian wars.

Shown at left is a nodule of flint as it occurs in the limestone. This nodule of flint was taken from a river bed in Mason County, Texas by Mark Imlay, GG, of San Antonio, Texas. 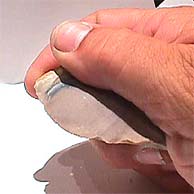 Gemological information on this page has been provided by the