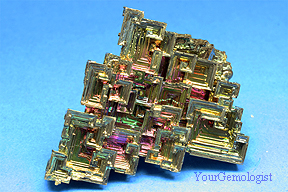 Source: Mostly from Bolivia but bismuth is also found as a by-product of the refining process of some metals.

Chemical: Bi ( a single element all to its own )

Formation: In hydrothermal vents and pegmatite dikes most often.

Unusual Properties: Bismuth has some interesting attributes. First are the amazing crystal shapes it forms, and the irridescent colors that it shows on its surface due to oxidation. (see above) Most notable is that it fuses and melts at a very low temperature. Which is why it is often used for boiler plugs to prevent blow-ups from pressure. Before the boiler will get hot enough to blow up the bismuth plug will melt and blow out. Same for fire sprinkler systems. The heat of a fire will melt a bizmuth plug very quickly and start the sprinkler system before the fire gets out of control. Also for electrical fuses because it will melt before the current gets too high and causes damage.

Perhaps one note to ponder….bizmuth carbonate has been used to treat diarrhea. But due to some toxic reactions from some patients it is not used much anymore. Think I’ll stick with the ol’ Kaopectate.

Below is a video produced by the Amazing Gem and Mineral Museum about the uses of bismuth.